Built over more than half a century, the E Pluribus Unum Collection is replete with coins and medals of superb rarity and quality, many with pedigrees dating as far back as the 19th century. Sales from this collection commenced in the Stack’s Bowers Galleries November 2019 Auction with the record-setting $1.5 million sale of New […]

Heritage Auctions has opened the third offering from the Donald G. Partrick Collection for bidding online now. Covering Hard Times and Merchant Tokens, this collection boasts over 800 lots of 19th-century tokens minted up to about the start of the Civil War, including, numerous extremely rare pieces, as might be expected from a collection of […]

By Tyler Rossi for CoinWeek ….. A fraternal organization whose origins are purported to stretch back to ancient times, FREEMASONRY has a storied history of secrecy and is often accused of wielding influence over whole societies and governments. The first recorded evidence of the Freemason initiation comes from the diary of Elias Ashmole. On October […]

By John Kraljevich – Numismatic Consultant, Stack’s Bowers …… Download your free copy of the catalog or view online   In November 2019, before the world of coin shows and everything else was turned on its ear, the first offering of coins from the E Pluribus Unum Collection was a throwback to the golden days […]

The post Month-Long Metals and Tokens and Currency Auctions From Heritage appeared first on CoinWeek.

By Stack’s Bowers Galleries …… The Big Sky Collection is an outstanding and comprehensive cabinet comprising thousands of trade tokens and related items from Montana and Montana Territory. This collection was assembled by a dedicated enthusiast over decades, and many of these tokens may not be available again for a long time. The collection includes […]

By Tyler Rossi ….. What makes modern money valuable? Simply put – belief. The whole modern financial system rests on the simple belief that the national government guarantees the value of an inherently valueless item. However, when people lose faith in their governments, they will search out alternatives. One such solution is notgeld, examples of […]

Live Auction Thursday, July 30, 2020 • 9:00 AM PT   The Tim Gabriele Collection of U.S. Merchant and Trade Tokens was over a decade in the making, its spark a 2007 visit to a coin dealer in Manhattan who had some marvelous tokens from the collection of Pittsburgh coin dealer and collector Charles “Cheech” […]

Double Struck, One of Three Known (on Shell Gas Tokens)   By Mike Byers for Mint Error News …… This is an amazing and spectacular Proof major mint error. It is a 1970 Kennedy half dollar from the San Francisco Mint that is double struck on an aluminum Shell Gas token. In 1969 and 1970, […]

By Charles Morgan for CoinWeek …..   The numismatic object illustrated above is a wonderfully preserved example of a private issue token categorized by numismatic researchers Harold E. Hibler and Charles V. Kappen as a So-Called Dollar. It is a political piece that was issued in the years immediately preceding the outbreak of the Civil […]

The post Never Keep a Paper Dollar in Your Pocket Till Tomorrow appeared first on CoinWeek.

In recognition of Susan Trask and her husband the late Frank Trask, the Civil War Token Society has created the annual Trask Family YN Summer Seminar Scholarship for young numismatists to apply for financial assistance to cover the cost of tuition, room, and board charged by the American Numismatic Association (ANA). Susan and Frank Trask […] 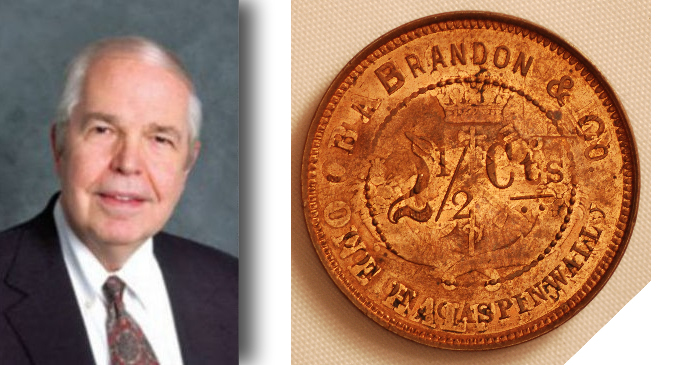 By Blanchard & Company …… “Before there was a nation, before there was a symbol of this young nation — a flag, a constitution, a national seal — there was Washington. Even when in the course of revolutionary events a flag did appear and a Constitution, they did not have a long tradition behind them. […]

By Blanchard & Company …… If you look at a coin from the United States you expect to find a phrase like “E Pluribus Unum”. However, if you’re lucky you might find a coin in your collection with a more ordinary phrase like “I take the responsibility”. Who would put a depressing message like this […]

The post The Strange Story of Hard Time Tokens appeared first on CoinWeek.

By Dennis Tucker – Publisher, Whitman Publishing, LLC ……   April 2019 Dear Bill, I’ve got something to vent about. Your article in the January/February 2019 issue of the Token and Medal Society’s TAMS Journal (“Merchant Token Ephemera From Wiley, Kansas”) makes me feel like I’ve been asleep for the past 15 years as a […]

The post An Open Letter to Bill Hyder and the Token and Medal Society appeared first on CoinWeek. 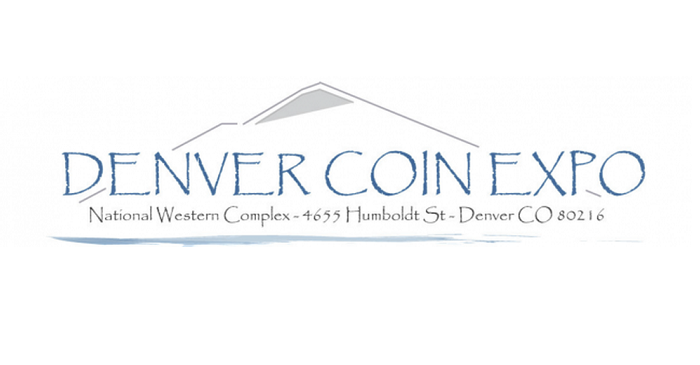 Over 100 exhibitors from around the country will join together for one of the largest and oldest coin shows in the Rocky Mountains this spring
Denver, CO — This spring, the Denver Coin Exposition is coming to the National Western Complex from May 9-11. It will be open to the public Thursday and Friday from 10 a

The post CoinWeek Podcast #97: Numismatic Americana Through the Eyes of John Kraljevich appeared first on CoinWeek.

One of the highlights of the upcoming Heritage April 20-24 World Coins Signature Auction is the Douglas Robins Collection of Canadian Tokens, possibly the finest collection of Canadian tokens to have ever been offered in a single auction. This collection will enjoy its own catalog, which is certain to become a key reference in the […]

By Q. David Bowers – Co-founder, Stack’s Bowers …… Once again the red carpet is rolled out for you at the Stack’s Bowers series of auctions to be held at the Whitman Coin & Collectibles Expo. A smorgasbord of delights awaits! Five separate catalogs describe some of the nicest items we’ve ever offered. Rarities Night […]

Welcome to the second installment in my series on the subject of American medals. I highlight some of those featured in the best-selling Whitman book, The 100 Greatest American Medals and Tokens, now with additional comments and updates

By Q. David Bowers
Welcome to the second installment in my series on the subject of American medals

By Joshua McMorrow-Hernandez for CoinWeek.com …… I’ve been rediscovering the joys of tokens & medals lately. I say “rediscovering” because I’ve actually been accumulating them–along with medals and other forms of exonumia–since I was a child. I just never formally considered myself a “collector” of tokens and medals, because I spent much more time […]

The post Exploring Tokens & Medals Through the Eyes of a Longtime Coin Collector appeared first on CoinWeek.

By Q. David Bowers – Co-founder, Stack’s Bowers …… Civil War tokens have been one of my great pleasures in numismatics. I first discovered them in the late 1950s when I visited Dr. George J. Fuld, then a professor at M.I.T., at his home in Wakefield, Massachusetts. I bought from him many duplicates from […]

The post Unlocking Numismatic History on the Internet appeared first on CoinWeek.

By Q. David Bowers – Stack’s Bowers …… Over a long period of years, ever since I discovered the world’s greatest hobby in 1952 at the age of 13, I have studied and read avidly. Now, many years later I am still learning. Along the way I have explored and have written books on colonial […]

The post Some Comments on Civil War Tokens & an Appreciation of George Fuld appeared first on CoinWeek.

By Coinweek …. CoinWeek News Wire for November 3, 2017:  Brain Food 1.) The Ideal Auction Preston McAfee, Chief Economist at Microsoft, explains the different kinds of auctions, how they work, what the pros and cons are, and why we don’t have auctions for everything we buy. Truly fascinating stuff. But where it gets deep […]

This rare unholed example issued by the fur trading business will go to auction in 2018 Numismatic Guaranty Corporation (NGC) recently certified the finest-known 1820 North West Company Token. Graded NGC MS 61, it is remarkable in its detail and surface quality for the issue. This example first appeared in public auction in 1952 during […]

Period Three back-dated BG-1301A listed in California Pioneer Fractional Gold by Max Spiegel, NGC Numismatic Researcher A few helpful tips can make sure you never get fooled by these sometimes deceptive fantasy pieces. California Fractional Gold is an interesting and historically significant series that includes more than 500 varieties. During the California Gold Rush […]

A few helpful tips can make sure you never get fooled by these sometimes deceptive fantasy pieces Period Three back-dated BG-1301A listed in California Pioneer Fractional Gold By Max Spiegel, NGC Numismatic Researcher ……   California Fractional Gold is an interesting and historically significant series that includes more than 500 varieties. During the California Gold […]

If you haven’t entered for your chance to win our Giveaway this week, you have lost your mind! Our 179th Giveaway features one of the most expensive and limited items we have ever offered. Collector Paul Sandler has provided us one of 30 restrike Complete sets of Heraldic Art Medallions. These So-Called Half Dollars […]

Description: On January 20, 2017, New York businessman and reality TV star Donald J. Trump was inaugurated as the 45th President of the United States in Washington, D.C. at the White House and the Capitol Building. To celebrate, Liberty Dollar creator and convicted counterfeiter Bernard Von NotHaus is releasing a special Trump Inaugural commemorative version […]

By Atlas Numismatics ……   We will be attending the FUN Convention and the New York International Numismatic Convention (NYINC) in January. Please note that we will only be able to carry a portion of the inventory available on our website; if you would like us to include any specific items for your examination at […]

By Coinweek …. CoinWeek News Wire for November 25, 2016 Brain Food 1.) Q&A: Erik Goldstein Erik J. Goldstein is the senior curator of mechanical arts and numismatics at the Colonial Williamsburg Foundation and has been in this position since 2002. A student of military history and numismatics, he has lectured widely and instructs a three-year […]

By Everett Millman – Gainesville Coins ……. Following the historic election of Donald J. Trump as the 45th president of the United States, would you expect to see “The Donald” appear on a coin? Bernard von Nothaus, the notorious creator of the “Liberty Dollar®”, is way ahead of you! Trump Dollar Coin? It’s worth clarifying […]

By Coinweek …. CoinWeek News Wire for October 28, 2016 Brain Food 1.) Is It Illegal to Deface US Currency? While this video may be ridiculously awesome, because Bill Murray is super cool, have you ever wondered if it is illegal to deface or alter a U.S. bank note? 2.) 7 Tips For Surviving Your First […]

Medals are a vital area of numismatics, but their complexity and scope can seem intimidating for collectors looking to branch out away from coins. In this CoinWeek IQ video, filmed at the American Numismatic Association’s (ANA) 2016 World’s Fair of Money, American token and medal expert John Kraljevich offers three important tips to help collectors […]

The post CoinWeek IQ: Three Things You Should Know Before You Start to Collect Medals appeared first on CoinWeek.

An article in today’s Washington Post calls attention to the collecting specialty of “challenge coins,” particularly CIA challenge coins. For those who are unfamiliar with the term, challenge coins are medallions that are imprinted with an organization’s insignia and distributed to its members

By WINGS Coins, LLC ….. WINGS Coins announces that for any five items submitted at regular price (US$12.50) that it will review an equal amount of items for free. This applies for any submission with a post-mark on or before August 8, 2016. Visit the website to download submission forms. You do not need to […]

By WINGS Coins, LLC …..   WINGS Coins announces that for any five items submitted at regular price (US$12.50) that it will review an equal amount of items for free. This applies for any submission with a post-mark on or before August 8, 2016. Visit the website to download submission forms. You do not need […]

By Coinweek …. Here is a recap of some of the interesting, offbeat and other news items CoinWeek has come across this week. Brain Food 1.) The Evolution of Money Alex Hernandez, tech writer and founder of smartphone and computer technology site Techaeris.com, writes a brief introduction to the history of money and monetary payment […]